Another in the Caron Jumbo Ombre.  This color is just to die for, it’s actually called Sepia but it’s a lovely muted pink type of color. 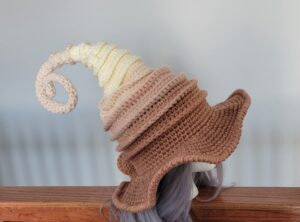 This would be glorious for any number of other projects, especially if your stitch count was the same like for a scarf or sweater.

If you look closely though, this one went from light pink, to white, to light pink, then faded to the darkest color.  Just like with the blue one, it is not possible with this yarn to go from lightest to darkest in one go.  Red Heart Ombre can do it if you plan well though.  The colors in this yarn duplicates about 3 times through the whole skein, whereas red heard is about twice. In my experience anyway.

I finally decided to try a different color of the Caron Jumbo Ombre: 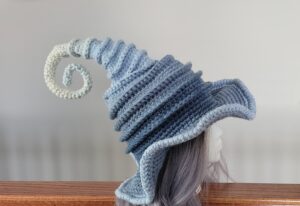 It really got me thinking about making an all white one and then dip-dying it.  It’s difficult to match the ombre up between two skeins and often I have to snip one skein, pull a bunch out, then retie it to match the other.  Also since the hat starts at 4 stitches and ends at 65, the fade can get lucky and go from light to dark but with this yarn, that was not possible.  I did it with Red Heart Ombre but you are still dependant on finding the absolute end of the lightest or darkest color to start with.  Then still cross your fingers.

Another solution would be to find a brand that has multiple colors in the same overall shade (Red Heart, I Love This Yarn! also possibly) and just manually do the fade.  I’ve said this in other projects but I do not like when rows 1-10 fade nicely but then 80+ start changing more frequently because the rounds are longer. The only yarn that did this nicely was Caron Tea Cakes and I can’t even get those any more!

Witch of the Midnight Sun

I was almost done with an all black hat when I thought about all the Autumn Sky Premier Colorfusion I still had sitting around.  I had planned on making a coat out of it using the sunflower grannie squares but I hadn’t gotten around to it quite yet.  So instead I added that yarn to this witch hat, I rather like how it came out. It didn’t feel like chunky yarn, though. 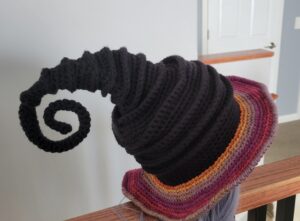 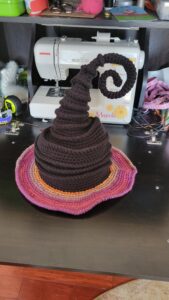 Witch of the South Seas!

Lately all I’ve been really doing is making witch hats.  Halloween is over yes but some people are witches all the time.  I love it personally.  A random witch hat will be my ‘wear a hat’ headwear of choice on Twitch too.

Speaking of, I tried out some minor tweaks on the pattern that I felt make not a lot of sense and it turned out fine.  The hat pattern itself has color changes which, in my opinion and observation of the pattern, are pulled into the hat by back posting a chain 3 on the row that makes the ridge, then doing a second bpdc to form the first actual stitch.

Only, some rows have this when there is NO color change, and some rows do NOT do this when there is no color change. It made no sense to me.  Since I only change color at the brim, and or at the edging, I decided to just ignore the double bpdc and you know what? It comes out just fine.  In fact, better than fine because it’s much easier to count the rows when you don’t have this weird double in the first stitch thing going on.

Also, if I DO a color change in the middle of the hat, I don’t do it in the ridge row.  I don’t like the color peeping through at the top.  I do the bpdc row, then switch colors.

Anywho, I had wanted to do a hat like this for a while, so here is my ‘beach wave’ witch hat!  Or Witch of the South Seas! 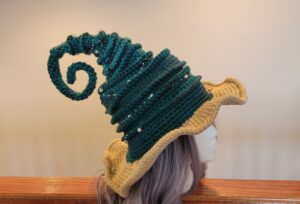 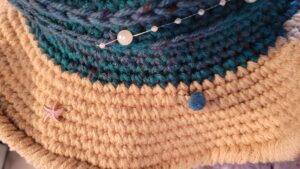 As I was making this hat I was thinking of the pink Mercy skin in Overwatch.  She’s not the witch skin obviously but this would suit her colors.  I also thought the butterfly buttons I got a while ago would make a cute accessory on it! 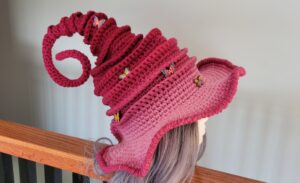 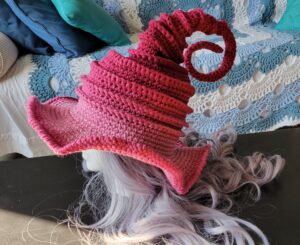