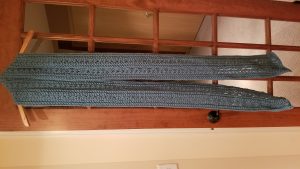 I follow a couple of channels on youtube who create patterns I like, but I’m finding one in particular has everything coming out way too big.  I use the same hook, the same yarn, but it’s simply WAY too large.

One was the mandala pattern.  I wasn’t even finished but it would have been dragging on the ground and sagging from its own weight, so that had to be frogged and many hours wasted.  And the problem with some patterns is you have no idea it will be too big until you are almost done!

We also had the cocoon sweater, which would be waaaaay too large the recommended size of about 42 inches.  I made one like that which required a pound of yarn and then some, but then it ended up hanging past my knees.  I’m almost petite sizing so that might be some of it, but I find I have to reduce everything by about 8 inches for it to work for me.

The scarf pictured also came out way too long, at almost 10 feet and if I had repeated as the pattern called, far too wide as well.  I stopped at 2 repeats and I think I’ll finish it  but the next one will be reduce by about 2 entire feet.

I should have paid better attention when I chained the first line on that one though.