This wouldn’t be the first time I had to completely frog (pull apart) an item or even modify the setup.  Sometimes you have to almost finish something before you even figure out it won’t even work, such as the case of the mandala vest I tried.  And oddly enough  you almost never have anyone comment on the patterns or the youtube channel saying “this isn’t working” or “this came out way too long”.

I tried the Annoo pattern for the black dress and I should have paid more attention that in THIS case, people were commenting that the pattern was confusing.  I didn’t really notice it until I got this far: 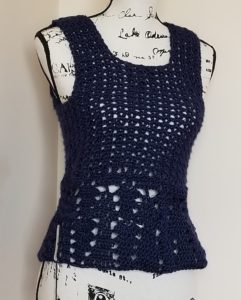 First off, her video pattern was rather confusing, which is odd because she’s usually very detailed.  I don’t like when a presenter says “in the next stitch do one double crochet (DC) and then another, and another, and another”.  I lost track, how many was that?  She did a lot of that instead of “do 1, 2, 3” or “do a dc  then another and another for a total of 3”.

I’m also very confused about the repeating pattern.  It’s a strange pattern of descending groupings I had a really hard time following, which was made worse when she described how to make a flouncy bottom skirt by adding more stitches.  I listened to that part over and over and still have no idea how to do it right.  It looks like you do 1 DC, skip a few chains, do 5 DC’s in each of the next two stitches, then the next has 3 DC’s… and 4 DCs in one stitch.. I can’t even follow. I started sorting out my own pattern after her original pattern which looks more clean but I still don’t even like it.

I think I’m going to unravel up to the V stitches and then do my own thing on this one.