My Best in Show Alpaca Pattern

It took some doing but I put together the steps I use for my alpacas.  I messed around with getting it on Raverly but you have to fill out pages and pages of stuff and geez forget it maybe another time. But finally, finally, I have added it to my Etsy Shop.

And I’d like to point out that unlike some other versions, mine WILL stand up on its own without tipping over.

Just a wee bit of history on this.  It was originally the No Drama Llama that Red Heart offered for free in a pattern they emailed me.  I thought it was cute and made my first one, which I screwed up because the steps were vague as heck in many areas, can you tell I sewed the neck/chest on BACKWARDS because the pattern didn’t say which way to put it?: 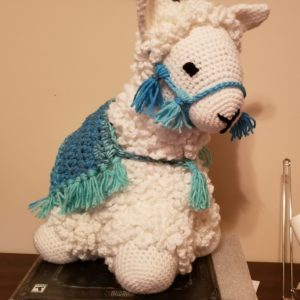 Then I was like wow, this came out BIG.  Like REALLY BIG.  I wanted it smaller, I thought it would be cuter.  So I used Caron Simply Soft which is a “4” but feels smaller than that and made this guy: 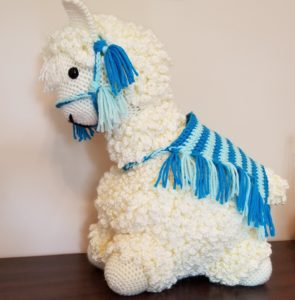 He was still just TOO BIG!  I started by scaling the face way down, the neck down, which helped reduce the body and made this little lady: 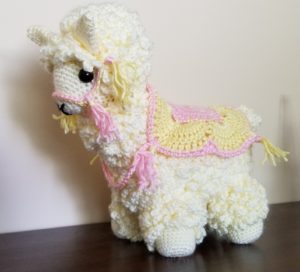 I wanted to make it maybe a little smaller so I tried scaling the body down more and the legs smaller, and made this guy: 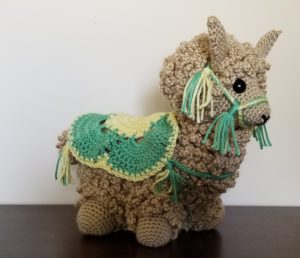 Cute but, I thought the eyes were now too big.  I scaled the eye size down.  The body was a little too small so I went back to the original. Then I made this one: 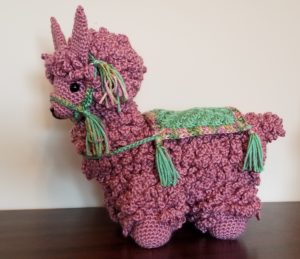 The back of the head was a little too big but I thought perhaps the body was too long, so I tried for a smaller one on this one: 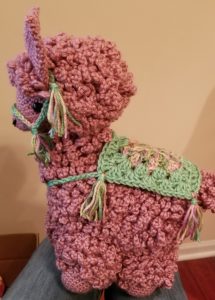 And the light green one.  No, the small body made the legs harder to place and made the alpaca a little top heavy. SOOOO I scaled the back of the head down more, went back to the original body width and length,

I though this one was nearly PERFECT.  Smaller face, head, body, legs, eyes.  But but but.  I did all that work for the fleece on it and I’m covering a big part of it with a blanket.  That’s pretty dumb, isn’t it?  And mine were so small and cute I felt they really weren’t “llamas” any more, they were alpacas, who, let’s be honest, are just cuter all around.

I then removed the blanket and came up with my own design (based off a grannie square) for a wreath instead.  And the “Best In Show Alpaca” was born! 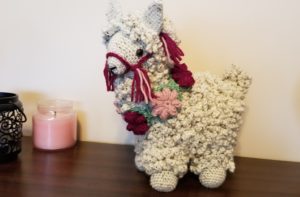 I also did a lamb version with a two-tone variation and sheep ears: 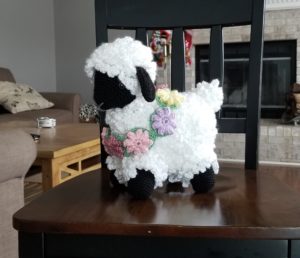 Needless to say this whole process of testing and rewriting took several months.