I enjoy learning new patterns but a lot of times I end up making edits one way or another.  I found myself doing that with the unicorn Bel pattern already!  I made two with the Caron Endless yarn, which came out smaller than the Caron One Pound.  I then also tried it with Caron Simply Soft and a 3.25 hook, and a baby 3 yarn, and I think that makes it come at just the perfect size around 6 inches rather than 8.

I also did back loops only on the 5th row on the legs to give the hooves a bit more definition, and even dropped switching color on the legs.  It’s faster and honestly I think it looks better.  Here is a pink one I finished today like that: 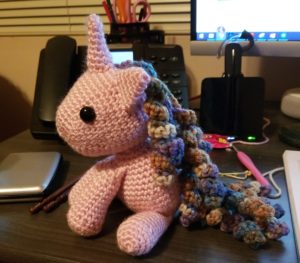 Reminds me of the 80’s My Little Ponys just a little bit.  I also never did the color change around the mouth (looks like a cow!) but I have messed around with different patterns on the legs. Like this one (baby yarn)! 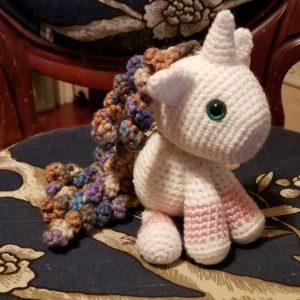 Anyway that being said here’s a few pattern swaps I like to do.

The horn from Unicorn Bell looks AMAZING.  The pattern calls for twisting thread around it as well, but I don’t bother with that.  The horn comes out perfectly.  The other pony pattern I have has one that uses a twisted method and I simply never could get it to look right.  It ends up looking like a Mcdonalds ice cream cone.  You are supposed to sew it in such a fashion that it looks like an actual horn but, I just couldn’t get it to work.  Ever.   I would DEFINITELY use the Bel horn on multiple other projects that have a need for a horn.  It’s simple and it looks GREAT.

The wings from the other pony pattern is at this time, my favorite set of wings.  I’ve used them on my sheepies and as long as the yarn is thick enough, it comes out beautifully.  Caron One Pound has been my fav so far, but with Caron Simply Soft I would have to use either double skeins or maybe another 2 or 3 yarn with it.  It comes out too splitty if you aren’t using a tight stitch and just way too thin otherwise.

All trial and error though!