Ok I am trying this coat again .  I’ve talked about it before but I’m going to again. First off, it’s the best grannie square coat I’ve seen.  The general layout is far and away better than a coat full of grannie squares which to me are just way too danged busy.

That being said, couple of things. 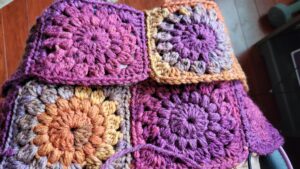 My mom gave me this yarn which I believe she purchased from a Goodwill or something.  Super Bulky Premier Yarns in color Winter Glow which had shades of off-white and purple.  Soft and very nice to crochet with I must say.  I kind of winged the pattern past the first two petal rows and then made up my own border.  I ended with about 1.5 yards left. It is heavy!  Apparently this company also makes Sweet Roll, which makes sense because they use colors that don’t fade into each other a lot.  Like … off-white and…. purple 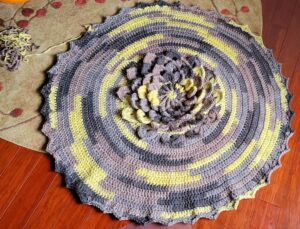 But I cannot tell you how much I liked to use this yarn.  Just a nice soft feel and lovely to crochet with.

The last of the failed orange hat

Well I sold the hat I made with the Red Heart Ombre Cocoa that didn’t turn out to work with that orange hat I wanted to duplicate.  I used up the rest of the Red Heart Print Newspaper for this hat and I admit it came out nicer than I figured it would.  I used odds and ends of white I had held double strand with the Newspaper. 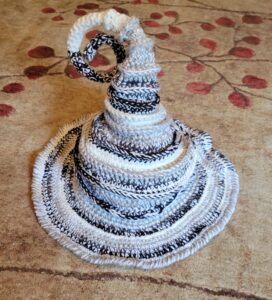 I’m tempted to add little red accents though, like blood drops.  You know, not literally ones but maybe those gemstone teardrop beads, but red ones!  I have some slightly greenish ones I might use for a sea hat though.

Someone on reddit did a flower like this and I followed the youtube videos and I like it a lot.  It came out REALLY nice.  I’m not sure what to call it though, the video name was really bland for such a pretty pattern.  I’m also not sure what to do with it.  On reddit they said just leave it like this but what good would that be? It’s not a blanket, hat, or other wearable.  This was with Lion Brand Mandala Baby Mermaid, and I really, really like the colors.  I ended up doing a freehand row of green since that was next in line on the skein.  If this had been a 4 yarn I would continue as a blanket.  But, I am REALLY tempted to get a 4 yarn in these colors and make this again as a throw.  The problem is the later rows don’t expand enough to make the petals lay flat.  They kind of perk up a bit which is ok but you’ll see starting with the blue row in particular, you aren’t increasing the petals, it’s just offsetting it.  So you’d need a row here and there like the crocodile stitch mermaid tail to increase it out.  Now that I get the overall pattern I could totally do that. 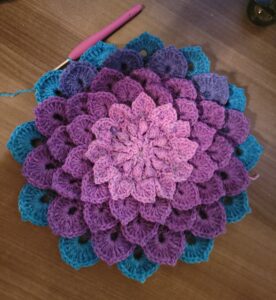 I wouldn’t literally make an entire blanket like this, I would do about this same amount of rows in a 4 or 5 yarn and then square it off in a solid color like green with a somewhat simple stitch.

My mom picked up this neat yarn from a garage sale or Goodwill or something, and it made me a little sad because it had a note on it and clearly no one ever used it.  But I did! 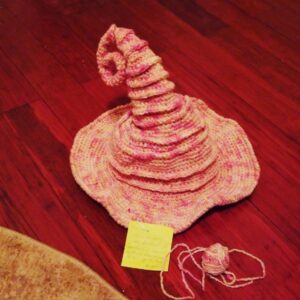 Donna, this is wool from Ireland.  It needs to be washed by band, otherwise is will felt.  Enjoy!